The name “chai” is actually the Hindi word for “tea”, which was derived from “cha”, the Chinese word for “tea”. In this case, the Hindi term chai means a mix of spices steeped into a tea-like beverage.

The spiced tea mixture is typically brewed strong with milk and sweetened with sugar or honey. However, today you can find the delicious Coconut Chai Tea in CafeSociety. 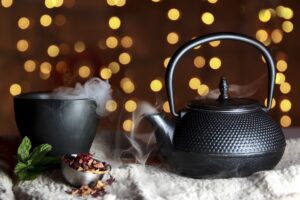 The principal ingredient of our Coconut Chai has an interesting origin story in Hindu Mythology. According to this legend, a Hindu sage named Vishwamitra decided to help his friend, the kind King Trishanku, fulfill his lifelong dreams to ascend up the sky to the heavens, to the realm of the gods.

As the coconut tends to be a common ingredient in many dishes in India, it has many other religious and cultural implications. They are used as temple offerings, for blessings, marriages, and deity installations, or as offerings for guests. Coconuts are sometimes even used as appeasement offerings to the sea by fishing communities in India’s peninsular areas, which would explain why you will find many coconuts washed up on some Indian beaches. (shantitea.ca)