Because matcha is made from high-quality tea, and the whole leaves are ingested, it’s a more potent source of nutrients than steeped green tea.

In addition to providing small amounts of vitamins and minerals, matcha is rich in antioxidants called polyphenols, which have been tied to protection against heart disease and cancer, as well as better blood sugar regulation, blood pressure reduction, and anti-aging. Another polyphenol in matcha called EGCG has been shown in research to boost metabolism, and slow or halt the growth of cancer cells.

The high-grade matcha is for drinking and the lower grades are used for culinary use. High-grade matcha tends to be bright green. Regardless of the grade, remember to use your matcha powder quickly after opening as it’ll oxidize and lose its flavor. 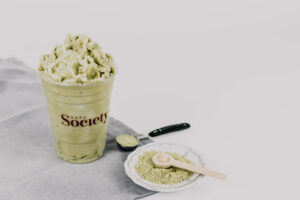 High in vitamin C, potassium, iron, as well as dietary fiber, matcha is also enjoyed to help maintain a healthy weight and burning fat. In addition, it has a wonderful ability to produce calming, meditative benefits when consumed. A welcome respite in our modern lifestyle.

In a 2017 study published in Food Research International, people who drank matcha experienced an increase in attention and processing speed an hour later likely due to a trifecta of L-theanine, a major polyphenol called epigallocatechin gallate (EGCG), and caffeine. So on your busiest workdays, splurging on a matcha latte might just be the perfect investment.

Matcha fans say that compared to the caffeine buzz from coffee, matcha creates an “alert calm” due to a natural substance it contains called l-theanine, which induces relaxation without drowsiness.