Cafe Society | What Is a Frappé? | CafeSociety

What Is a Frappé? | CafeSociety

The word Frappé comes from the French word frapper which means to slap, knock, or beat.

Originating in the 19th century, this drink has some of the widest variations you can find as far as how it’s made.

Although the word Frappé originates from the French, The Frappé was created just by chance in 1957 in the Greek city of Thessaloniki by Dimitris Vakondios.

He started thinking “outside the box” to cool down the summer temperature. So, used cold water instead of hot, inside a shaker adding sugar and milk. The Frappé was Born! 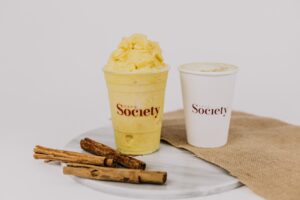 Generally speaking, it is an iced drink that has been blended and is often served with whipped cream and other toppings.

Depending on how the frappé is made, there are a number of differences between them, and they can vary wildly in the way that they taste depending on the flavor that you get.

Time ago, you could only buy a frappé in a store. Today, you can enjoy it at home.

You do not need to go to a shop to get an excellent Frappé. Just visit CafeSociety and get the finest tastes with the best benefits for you.